Although the current average age of NBA players is 26.2 years old, several of the best players started their careers when they were just eighteen or nineteen.

This culture isn’t a norm, though. The NBA now bans selecting players immediately after high school. However, the players listed here were drafted after high school. A number of these NBA picks are legends, while some only had brief careers. 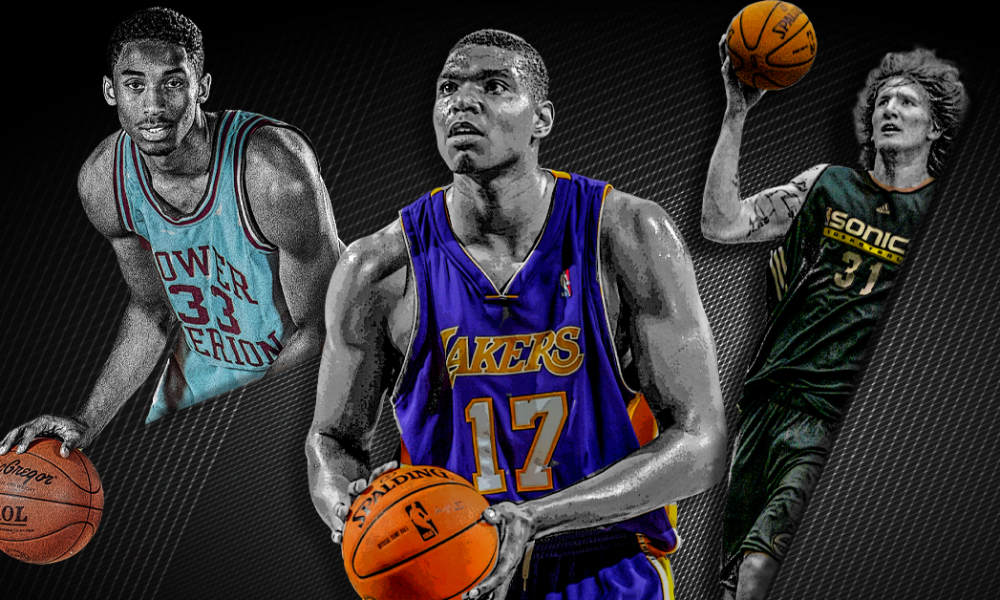 Read on to learn about eight of the youngest players in NBA history.

Kobe Bryant was eighteen, two months, and eleven days old on his first game on November 3, 1996. He was one of the youngest players to be drafted and quickly made a name for himself in the 1997 slam dunk contest.

Bryant spent his professional career with the Lakers and won five NBA championships. He continuously set records, including being the first guard in NBA history to play 20 seasons.

He retired after the 2015-2016 season due to physical decline, as he had suffered knee and shoulder injuries and a torn Achilles heel. After his retirement, Kobe enjoyed his life as a celebrity before he died in early 2020 in a disastrous helicopter accident.

Andrew Bynum was eighteen and six days old on the day of his first game on November 2, 2005. He made history by being the youngest player ever in the NBA.

He played center for the Los Angeles Lakers until 2012 before he joined the Cleveland Cavaliers for most of the 2013-2014 season. He eventually signed with the Indiana Pacers for the remainder of that season.

Jim Browne was eighteen years, one month, and twenty-seven days old when he played his first game on November 30, 1948. Browne held the record for the youngest NBA player before Jermaine O’Neal beat the paper in 1996.

Bill Willoughby was eighteen years, five months, and three days old when he played his first game on October 23, 1975. The Atlanta Hawks drafted him, although he spent a few seasons with them.

Willoughby was traded frequently and played for six teams in his eight years in the NBA, including the Atlanta Hawks, Buffalo Braves, Cleveland Cavaliers, Houston Rockets, San Antonio Spurs, and New Jersey Nets.

Jermaine O’Neal was eighteen, one month, and twenty-three days old when he played his first game on December 5, 1996. He was the youngest player in the NBA before Andrew Bynum broke his record in 2005.

He made history on January 22, 1997, when he became the youngest player to score 20 points in a game.

Andris was eighteen years, seven months, and three days old when he played his first game on November 5, 2004. He is originally from Latvia.

The Golden State Warriors kept Biedriņš on the team until 2013, even though he did not get much better following his first season. Biedriņš was traded to the Utah Jazz in the same year, who chose to release him the subsequent year, and he played for the Latvian national team for a while in addition to his NBA career.

Yaroslav Korolev was eighteen years, five months, and twenty-eight days old when he played his first game on November 4, 2005.

Due to his brief NBA career, Yaroslav Korolev is a relatively unknown professional basketball player in the West. The Los Angeles Clippers chose Korolev as the 12th overall choice in the 2005 NBA Draft.

Tracy McGrady was eighteen years, five months, and seven days old when he played his first game on October 31, 1997.

The Toronto Raptors selected McGrady as the ninth overall choice in the 1997 NBA Draft. McGrady gradually ascended to a stronger position with the Raptors after beginning as a player with little playing time.

There you have it, eight of the youngest players in NBA history. Did your favorite baller come in young too? Let us know in the comments!

The Value of Sports