Android Tablets vs. iPad – this may well become the big tech debate of 2011. I will break down the differences for you and tell you what side I am on! There are several key differences between the two devices –

Obviously, one of the largest differences between the two systems is the operating system. Android tablets are running on some Android OS version from Google, while Apple’s iPad is running on Apple’s iOS. Both are the same basic OS that runs on the companies’ respective smartphones. 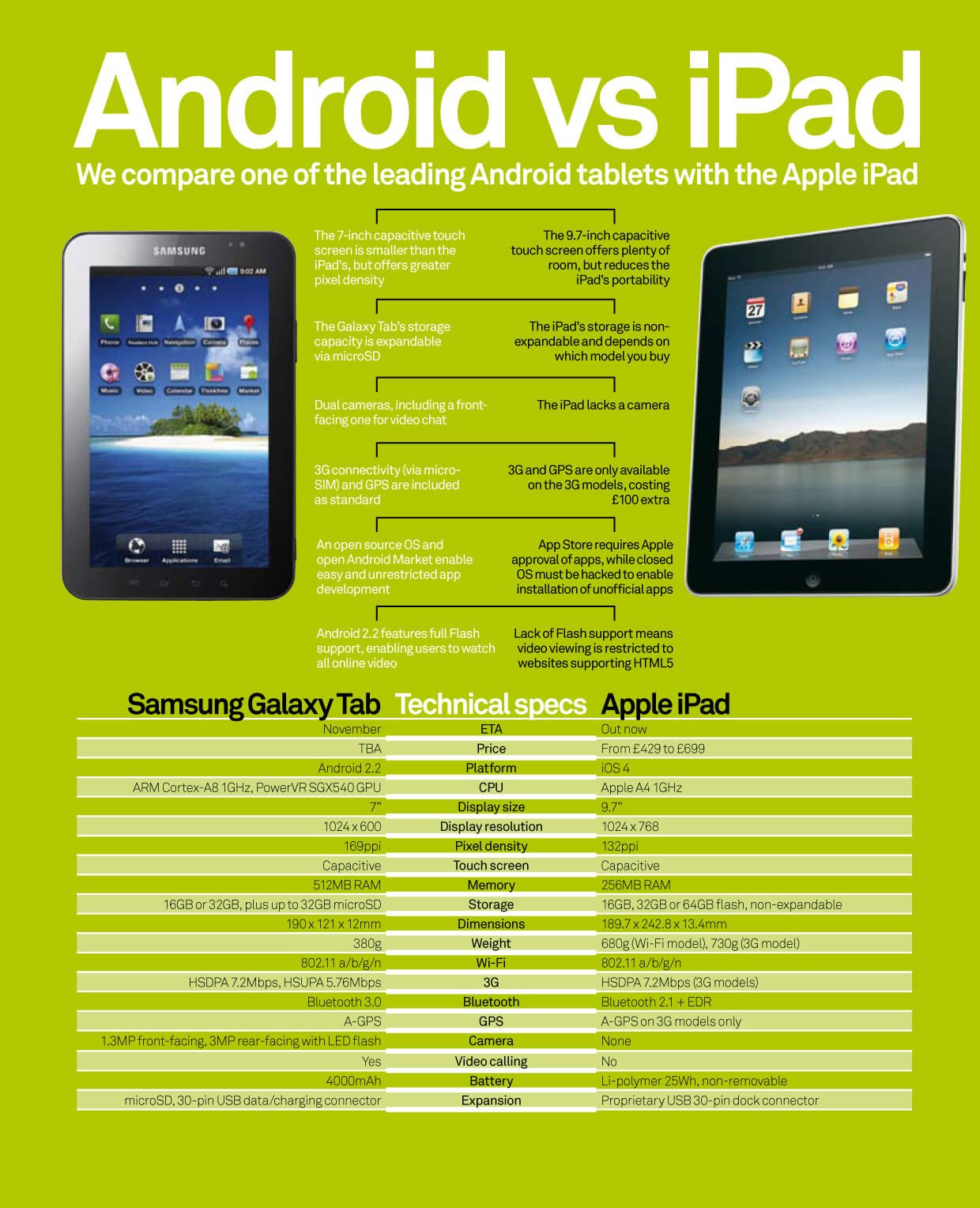 To me, this is just a matter of preference. These days, many developers prefer Android over iOS, as it is much easier to get a new app into Android’s app market. However, every Android tablet (and phone) may run on a different version of the software, making it a bit unsettling for users, as some apps may work only on a newer version of Android, which every tablet may not get.

The companies that develop the tablets decide when to push an update of the Android software to each type of device, so one type might get an update, while others may wait for months or never get an update at all.

There is no clear winner in this arena. If you get a chance, try each one and see which operating system you like best. Personally, I am a bigger fan of Android.

Having a big screen can be a plus or a minus, depending on what you plan to use it for, and especially on how you plan to carry a tablet around. For example, I purchased the Samsung Galaxy Tab, considered one of the best Android tablets currently on the market, and a big selling point for mews the screen was actually much smaller than the iPad.

The iPad screen is over 10 inches, making it almost as big as some small laptops. That can be great if you plan to carry it in a backpack all the time and watch videos on it, but it makes it harder to carry around. The Galaxy Tab made more sense because I don’t carry a backpack and like to bring it to meetings.

So, again, no clear winner here. You may want to decide whether you want a portable wireless device or the biggest screen possible. One caveat here, however – soon, there will likely be tablets running Android on the market that have screens the size of the iPad.

You can discuss Android tablets vs. iPad without talking about apps. Apps make or break the tablet, in my opinion. Having used both operating systems extensively, I will say that, although the iPad certainly has more apps than Android, I have not been disappointed with Android and can find just about any app I can think of. Also, almost every company that makes an iPad app makes an Android app as well.

In fact, in my estimation, given that Android sales are now surpassing iPhone, and the fact I mentioned above – that it is easier to develop apps and get in the Android market, I would not be surprised to see Android catch up the Apple in the future when it comes to apps.

It seems that even the best Android tablets are cheaper overall, and you can find some good, cheap Android tablets out there. Both have data plans, and you can’t do much without a data plan on a tablet unless you stay in a wifi zone, so you will likely end up paying about the same there.

However, when it comes to the cost of the device itself, Android wins.

This argument will rage on during 2011, but when it comes to Android Tablets vs. the iPad, I am all for Android!